The IWTN focuses on uniting and co-ordinating the strategic efforts of local authorities and communities involved in the management, conservation and enhancement of historic walled towns in Ireland. At present, there are 29 member towns located across Ireland (both North and South). 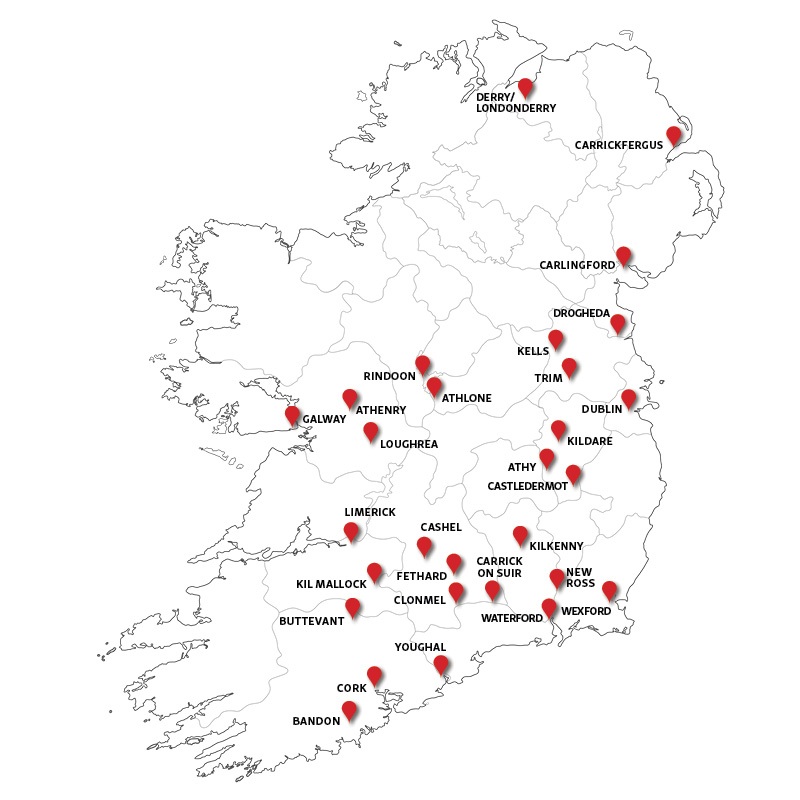 Our approach is to work with local communities and to empower them through funding, training and guidance. There are four main ways we help our member towns.

Over the years by recording many of the presentations at our educational events we have created the world’s largest collection of videos dedicated to the urban renewal of towns. There are almost 100 presentations available to watch.

We have also created a webpage dedicated to helping people renew their town or village. Organised according to relevant topics such as retail, tourism and conservation, the page provides links to relevant publications, presentations, education opportunities and funding sources.

By working in collaboration with the various local authorities and communities of our 29 member towns we have achieved much: 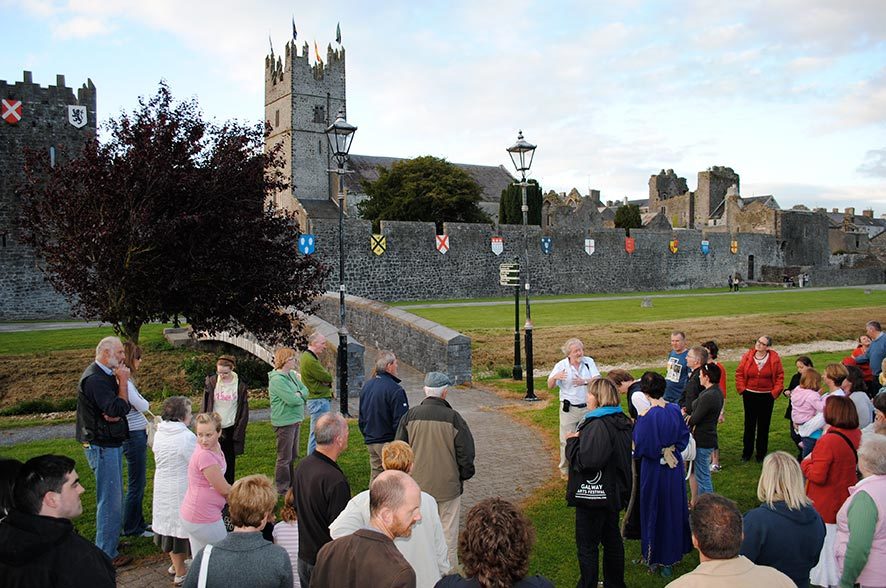 Some of our projects

Loughrea's medieval festival is Ireland's largest free medieval themed event. Established in 2014, it attracts roughly 15,000 people into the town. In Youghal, Co. Cork, a similar event attracts up to 8,000 people annually. In 2008, a KPMG report estimated that the economic benefit to the town from this one day was €480,000. Both Youghal and Loughrea's festivals depend on close cooperation between the community and the local authority in order to succeed. The IWTN is the prime funder of both events. We have also provided training to the organisers.

Over four Thursdays in August 2014, a pop-up museum brought heritage directly to the people by locating itself in the place of highest footfall, right beside the weekly farmers market. By combining archaeology with art, public theatre and food, it worked to excite people about the relevance of the past. The Kilkenny Pop-up museum was an attempt to see if a seasonal heritage attraction which was low on capital expenditure but high on interactivity would work. It did. In four days 3,080 attended. The IWTN was a co-organiser and the prime funder.

To learn more about the Kilkenny Pop-up Museum click here and skip to 6 minutes 10 seconds.

Rindoon in Co. Roscommon is the best preserved abandoned medieval town in either Ireland or the UK. Located on a peninsula jutting out in to Lough Ree the site contains an impressive collection of medieval remains. The local community working in partnership with the IWTN and other agencies have managed to save much of what survived. To aid navigation and understanding a walk was developed and interpretation signage installed. From very low numbers the site now attracts c.8,000 visitors annually. The IWTN is the main funder of the conservation works. We also funded and designed the site's interpretation.

To learn more about the Rindoon project click here.

The tower is the most impressive surviving section of the medieval city wall of Kilkenny. Until relatively recently, there were calls to have it dismantled due to health and safety concerns. However, by working with the local authority we not only saved it, we managed to create a pocket park with the tower as its centrepiece. Now open and enjoyed by both locals and tourists, the tower has also been used as a venue for Kilkenny Arts Festival. The IWTN were the main funder of the tower's conservation. We also supported the site's interpretation.

To learn more about the Talbot's Tower project click here.

An innovation of the IWTN, the Kick-Start Project is a multipronged initiative to renew historic towns. After a competitive process, Kells in Co. Meath, was chosen as the pilot. For the first time, the conservation of a town’s heritage assets was combined with the enhancement of the skills of its retailers and a community-led regeneration plan that incorporated public realm, the arts, heritage, planning and parking, tourism and retail. Much facade conservation work in the town centre has already been completed. The regeneration plan is done and training is ongoing. Already, the scheme has allowed the community to leverage additional funds in their drive to renew Kells.

The IWTN have been assisting Galway Civic Museum and Galway City Council in their efforts to construct a new medieval wing to the museum that will also allow access to the top of the Spanish Arch. We have provided funding for the city wall conservation plan, concept plans of the new wing and an economic impact appraisal.

Over several years, the IWTN supported Dublin City Council and Dublinia in creating an interactive online platform where historical research on the walled city of Dublin would be freely accessible. The compelling site directly ties into the primary and secondary school curricula. Available across desktop and mobile devices, in 2016, the learning zone was the No.1 most visited free web resource in Ireland amongst primary school teachers/pupils and No.2 in secondary school equivalent rankings.

Dig: the Value of Archaeology for Society and the Economy five day Conference

For five days in November 2018, 300 delegates gained at least partial answers to the questions: how does archaeology impact positively on our society and economy? And secondly, how could this be sustainably deepened? Speakers from Ireland, the UK, Sweden and the USA both informed and inspired a diverse audience attending the 24 separate events that made up Dig. Aside from the main two day conference, there were tours, workshops, digital recording demonstrations, panel discussions and even a poetry reading in a medieval tower.

Dig was a collaboration between the Heritage Council, Department of Culture, Heritage and the Gaeltacht, Department of Communities NI, Fáilte Ireland, Institute of Archaeologists of Ireland, Transport Infrastructure Ireland, and Dublin City Council. It was project managed by the Irish Walled Towns Network and receiving support from Creative Ireland.

For our dedicated Renewing your Historic Town or Village webpage click here.

Youghal A Heritage Led Vision To The Next Decade

The IWTN is not a top down organisation. Rather, it exists to help its members. The network’s activities are controlled by a steering committee. The committee is made up of representatives from the Department of Culture, Heritage and the Gaeltacht, the Northern Ireland Department of Communities, The Heritage Council and several member towns. Oversight and governance is provided by The Heritage Council which also administers all finances.

For more information on our member towns visit the IWTN's website.

Your Heritage in LEGO® brick- Competition

A national integrated online resource that provides access to a broad and fascinating range of Irish historical archives.