Take a virtual visit to

Looking East to Lugnaquilla the highest point of the Wicklow Mountains, through the Glenn of Imaal, not far north of the River Slaney, is a remnant of an embanked stone circle. This is a prehistoric stone circle made from massive stones surrounded by an earthen bank measuring 30m in diameter. It is situated in a field off a road that leads down to the N81. Aerial photography has revealed an outer ditch that surrounds the stone circle telling us that this was a more complex monument in its day. A visitor now, as at the time it was built, would have to absorb what it is and how it relates to the surrounding hills and mountains. It is knitted into the shape of the land, and we can be sure that the people who put these stones here did it only after figuring out the most meaningful place.

Two brighter stones of quartz mark the entrance to the East, facing the mountains. It is tempting to see the stones as mimicking the shape of the hills. From the centre it is possible to see other significant points in the landscape, where other built features of this society were located, like, for example, Spinans Hill, where there is a very substantial hillfort.

Stone circles are likely to date from the later bronze age c. 1500 – 500BC. This is a time of impressive bronze objects and hoards, amazing goldwork and the construction of massive hillforts.

We don’t know how they moved the stones around. This is not a tomb, but an arena for meeting and for ritual, possibly when the people of the mountains came over the river to meet the people of the lower land of the plains of what is now County Kildare. Who knows? Maybe it was important for decision-making or trade, maybe for celebrations (religious or just meeting other people), maybe for games, or all these and more. What would you like to meet up to do if you lived five thousand years ago? Can you imagine what people wore?

Today, this is a quiet place, with sheep or cattle grazing, the low hawthorn trees catching scraps of wool. They have biodiversity interest in themselves but the trees and hedgerows cut short our views out into the landscape. There are ESB lines across the circle, and, nearby to the west, high-voltage transmission lines bring electricity around the country, and the tarmacadamed road. These are our civilization’s power visible in the landscape, leaving the traces of today.

Castleruddery Lower Stone Circle is a National Monument in state ownership (No. 441), cared for on behalf of us all because it is evidence of the past. Harold Leask, the Inspector of Monuments, made a drawing of the circle shortly after it was designated a National Monument, and published it in the Journal of the Royal Society of the Antiquaries of Ireland in 1945, just as World War 2 was ending. (JRSAI, 1945, Vol. 75, No. 4, pp. 266 – 267). The magazine, Archaeology Ireland published a lovely guide to this place in 2001. The list of their 87 other guides is Here.

But the monument or place is also a springboard for the imagination, or even, you might fancy, a place for the spirits of people past to be summoned to mind. The first map makers called it a ‘Druidical Circle’, but this is too imprecise or fanciful a term for objective archaeologists. If we think of the past as a place to travel ‘to’ in time, then the sheep, hedgerows, roads and power lines are a distraction. But they are part of who we are, this is our landscape, and, if you think about it, quite an achievement in itself. Which would you prefer, now or then? Maybe the way we can know about or imagine the past is something that is also part of who we are now. We have no way of knowing whether our ancestors had this sense of their past. That is impossible to imagine or know. 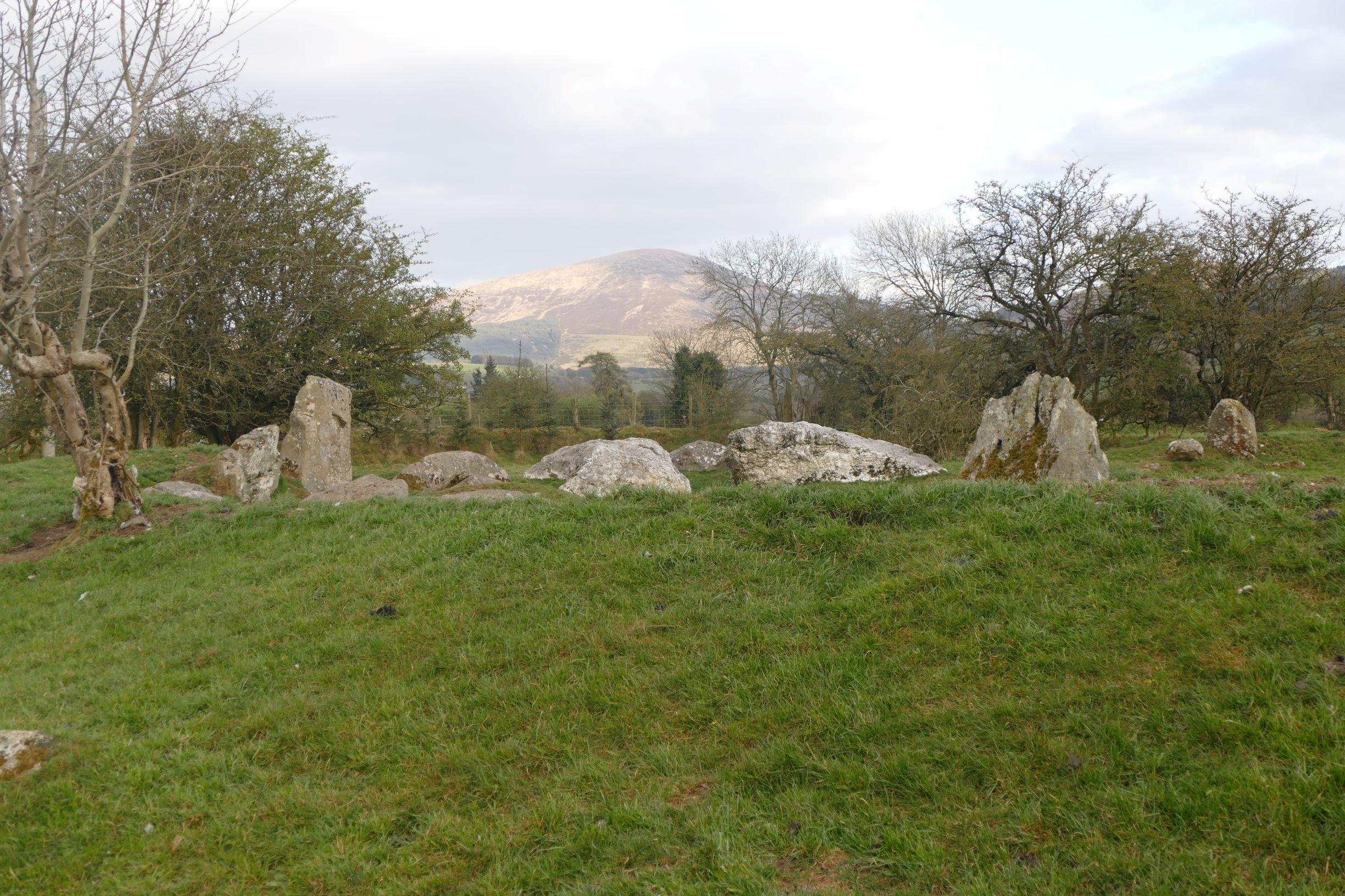