Local communities to benefit from almost €2.5m in heritage funding

Wildlife, local economies and tourism to flourish as Heritage Council announces €2.37m worth of funding for projects.

Funding from three Heritage Council schemes (see notes for editors below), which collectively help to conserve and restore built, cultural and natural heritage throughout the country, will be issued to grant recipients this year.

Work on these projects can begin immediately which will see hundreds of local communities enriched through initiatives, from the conservation of medieval town defence walls in our walled towns, to the digitisation of otherwise vulnerable materials, to supporting endangered wildlife to thrive in their natural habitats. The projects will all be completed by the end of the year.

Following its call for applications, the Heritage Council received hundreds of proposals from those who care for our heritage, individuals, heritage volunteers, community groups, organisations and local authorities.

The Cabragh Wetlands in Tipperary, through the dedication of the Cabragh Wetlands Trust, has become a habitat where migratory birds, like wigeons, plovers, lapwings, gulls and curlews, settle and breed. However, excessive reed growth in the area threatens the ability of these birds to thrive. They will use their €5,800 grant to ensure the area is suitable for ground-nesting by removing the reeds and de-silting the ponds.

John Wesley was an English cleric known for being one of the founding fathers of Methodism. He visited Carlow many times throughout his life, with his final visit coming in 1789. A plaque marking that trip is being donated by the Carlow Methodist Church to the Carlow County Museum. The Heritage Council grant will cover the costs of conserving this valuable historical artifact.

As hundreds of projects like these reach completion, the resulting enrichment of life in Irish towns and villages will come into focus. The restoration of historically significant buildings, as well as the funding given to upgrade and update websites and accessibility, will attract more tourists; create greater footfall across the country to the benefit of local economies; and the preservation of habitats will allow wildlife to flourish.

Last year, Heritage Council funding enabled a community heritage group to restore the World War II "EIRE 6" neutrality/aerial recognition sign on Howth Head. President Michael D. Higgins unveiled the sign, which acted as a navigation marker during World War II, on April 9. Before Heritage Council funding was granted, the sign had been completely buried but is now visible to flight passengers upon descent into Dublin airport.

Minister for Housing, Local Government and Heritage, Darragh O’Brien, TD, said: “I would like to warmly welcome today’s announcement by the Heritage Council. Funding of this nature is crucial in giving heritage volunteers and professionals the support they need to safeguard the built, cultural and natural heritage in our country. It is also a significant investment in this Government’s commitments under the Programme for Government to promote and protect our heritage.”

Minister of State for Heritage and Electoral Reform, Malcolm Noonan, TD, said: “It gives me great pleasure today as Minister of State for Heritage, to congratulate the hundreds of grant recipients whose important projects will benefit from these Heritage Council schemes. Looking at the details of these projects, I feel assured that our country’s heritage, in all its forms, is in safe hands and I am very much looking forward to seeing the results of the hard work done by our partners in the heritage sector.”

Chairperson of The Heritage Council, Martina Moloney, said: “The range of projects funded mirrors the variety of our heritage and the commitment of the grassroots groups who do such important work in caring for our heritage.”

Virginia Teehan, Chief Executive of The Heritage Council, said: “Individually, these projects will enrich local communities, preserving their history, safeguarding their local habitats. Collectively, they tell the story of a country where dedicated heritage professionals and volunteers understand the value of preservation, restoration and conservation.”

Full list of recipients under the Community Heritage Grant Scheme, Heritage Stewardship Fund and the Irish Walled Towns Network are available below 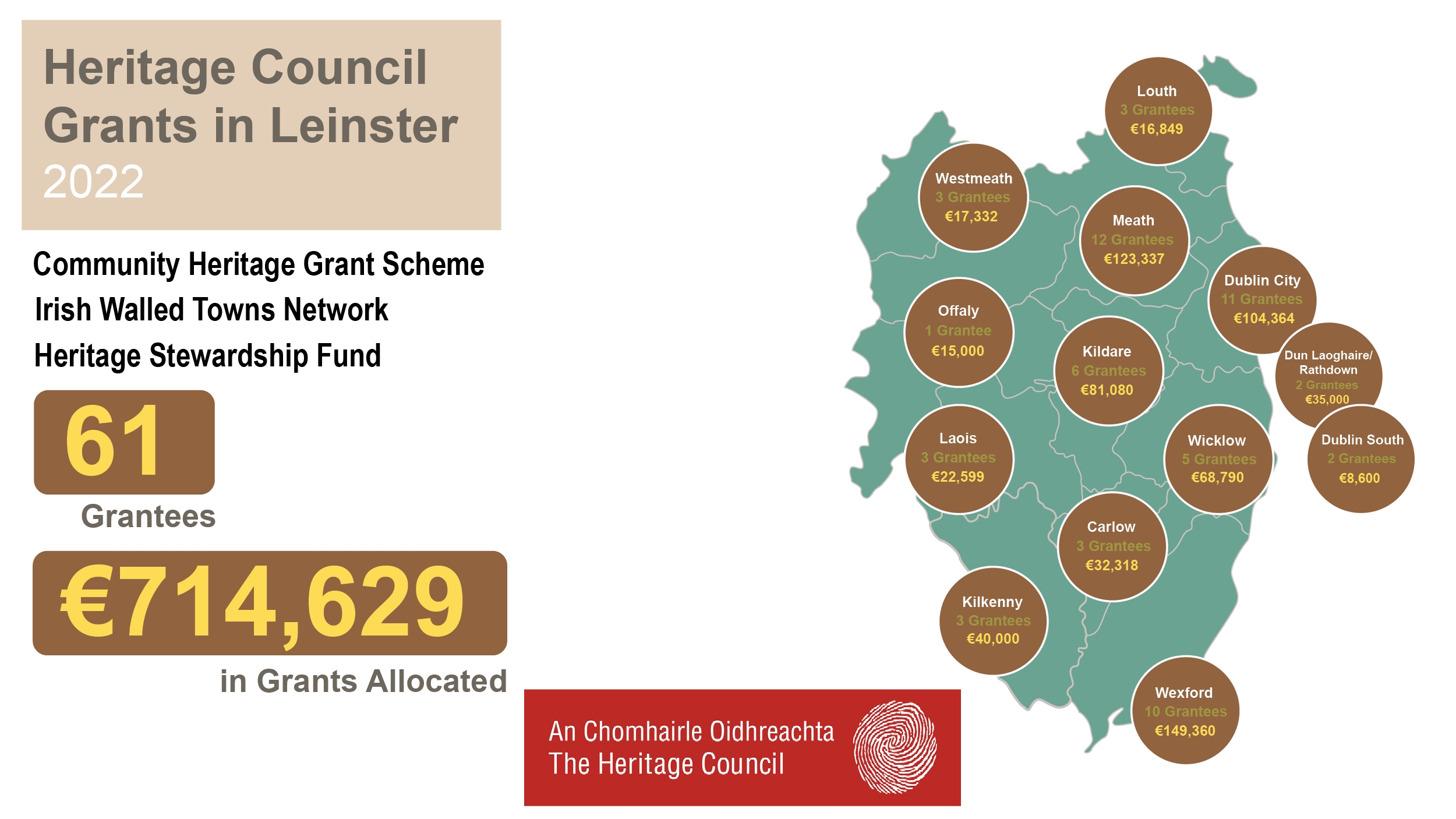 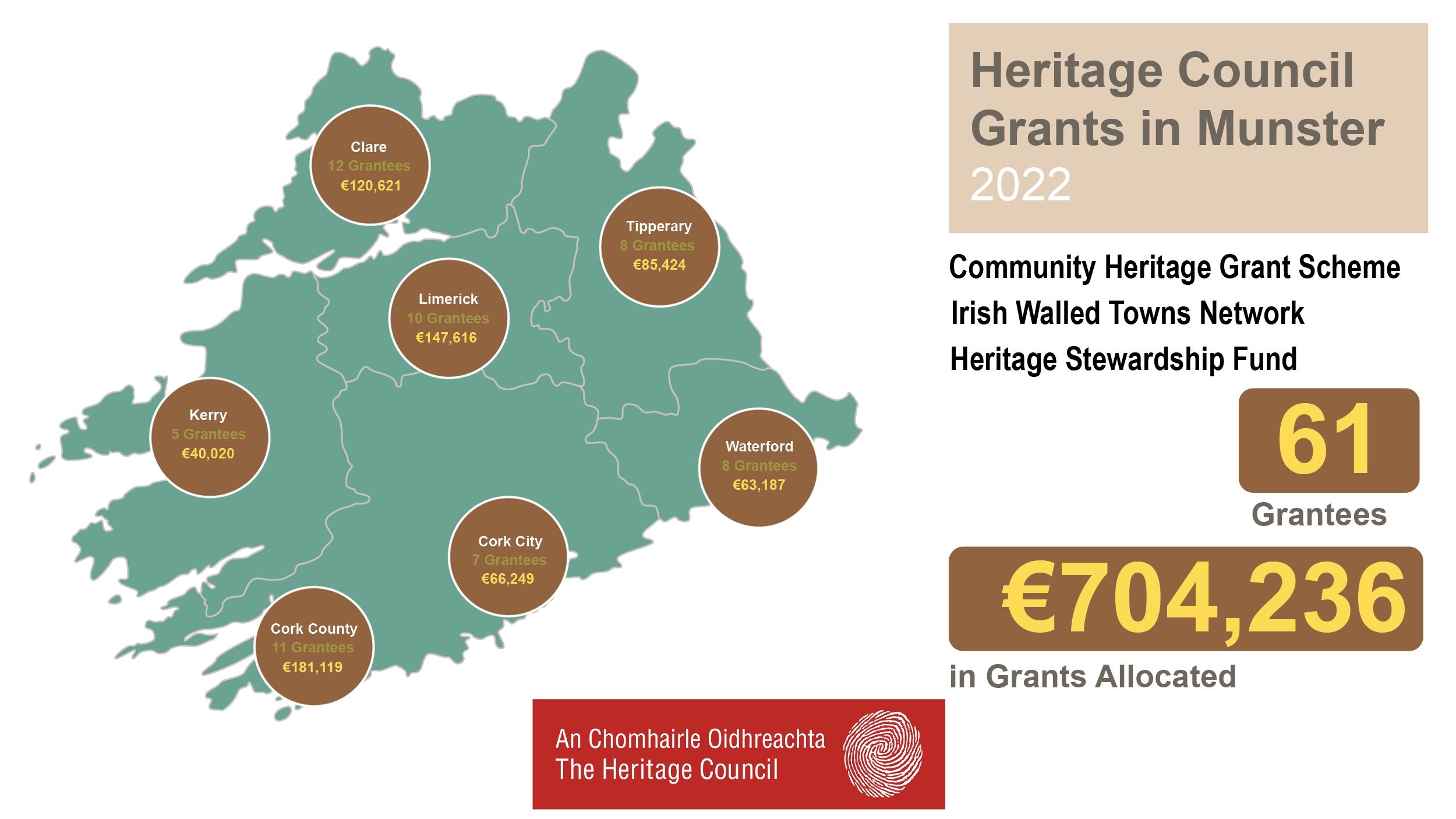 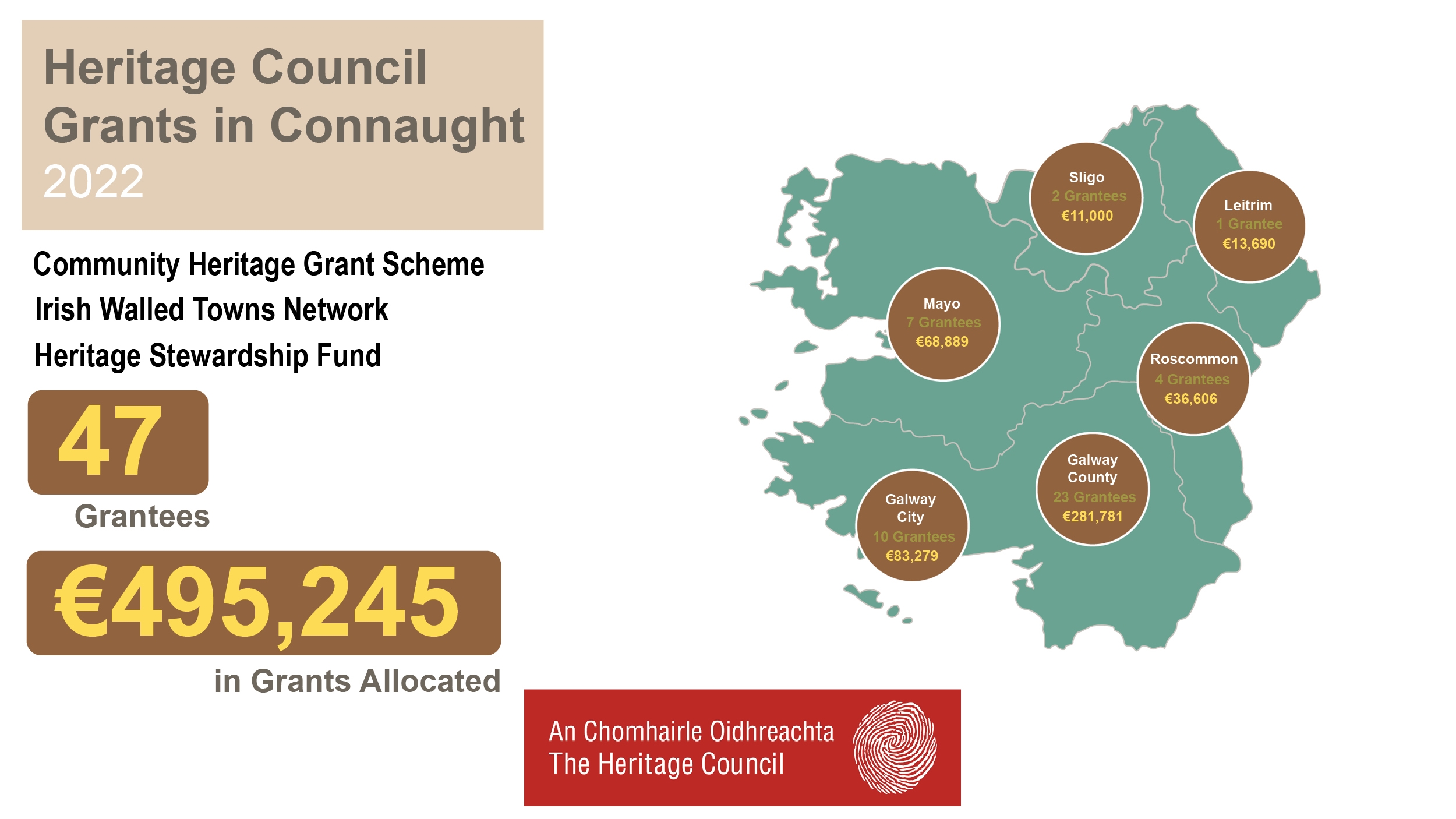 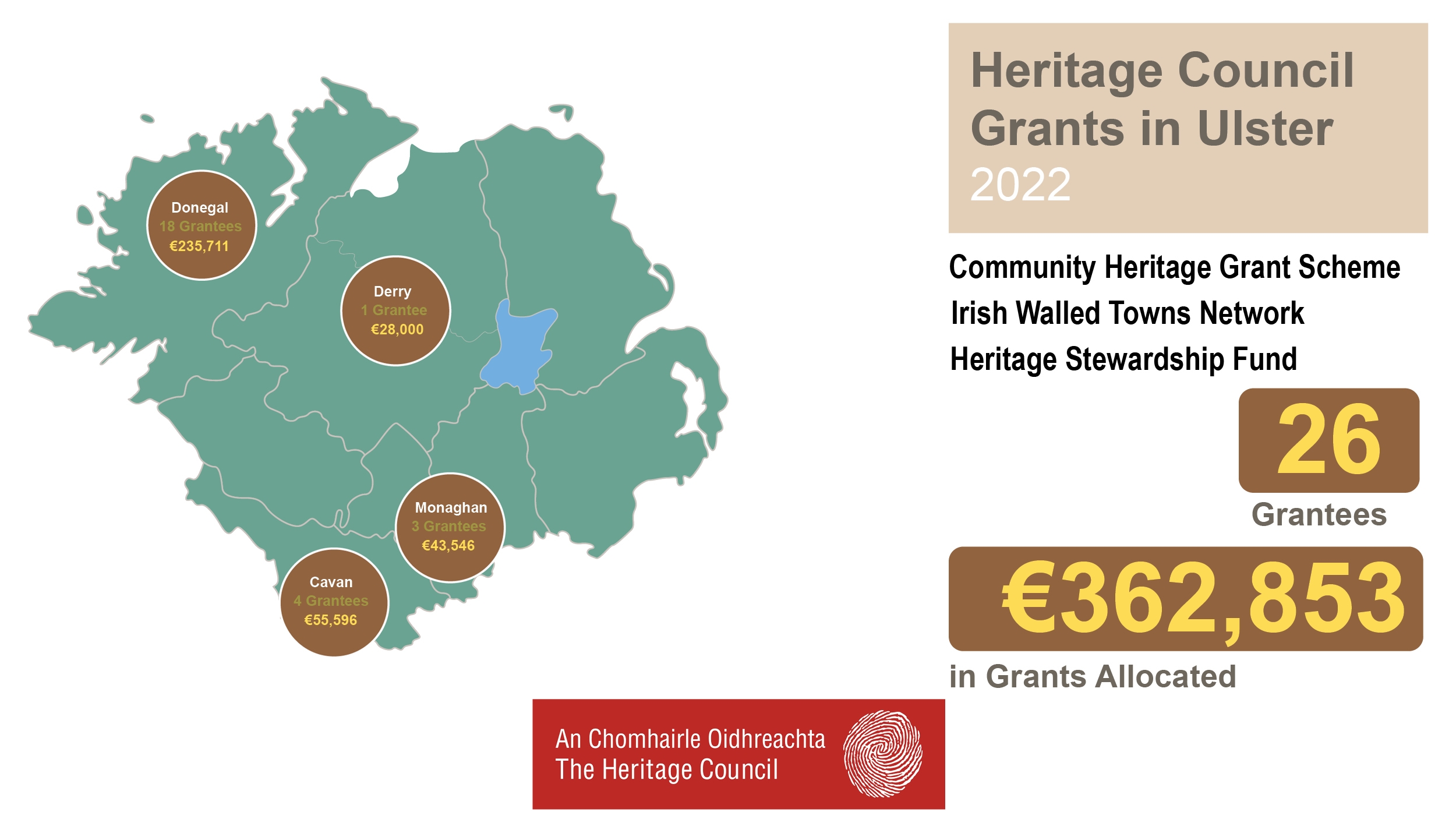 Awards range from €2,000 to €20,000 per project for applications that improve access and inclusion to heritage sites; that apply good heritage practice to the management of places, collections, or objects (including buildings). The scheme also supports the purchase of essential equipment. This scheme is intended to enable communities and heritage non-governmental organisations (NGOs) to continue their work in this area or to start new initiatives.

The Heritage Stewardship Fund was set up in 2022 to support and build the capacity of staff who play a key role in the heritage infrastructure of Ireland and are vital to the delivery of national policy and plans. Applications were received from local authority-based museum curators, archivists, archaeologists, architectural conservation officers and biodiversity officers. This scheme was also open to employees of state agencies and third level educational institutions proposing heritage focused projects.

Under the Heritage Council’s Irish Walled Towns Network (IWTN), €424,617 is earmarked for conservation work and interpretation initiatives, which will protect and preserve the history and heritage of Ireland’s walled towns. Twenty-three projects will be supported in 2022 with projects ranging from €5,000 to €50,000.

About The Heritage Council:

Established under The Heritage Act 1995, the Heritage Council is a public body whose mission is to develop a wide understanding of the vital contribution that our heritage makes to our social, environmental & economic well-being. The Heritage Council has a particular responsibility to promote interest, education, knowledge and pride in national heritage. See here for more: https://www.heritagecouncil.ie/ or follow us on Twitter @HeritageHubIRE